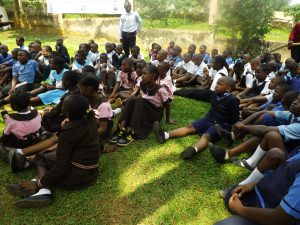 Mobilising the Youth on Environmental Protection and the Climate Change Debate.

Climate change and environmental management has left no one indifferent. The environmental protection and the climate change debate is one of CAMYOSFOP latest programs initiated in 2011. The program is aimed at mobilizing and sensitizing the youth and the general public on the best practices of environmental protection that will go a long way to improve on the climatic conditions of our planet earth. On this basis in 2011, CAMYOSFOP through the funding of the Global Green Grants (GGF) and the support of the Cameroon Climate Change Adaptation Program, and the Global Water Partnership, Cameroon, organized a regional workshop on climate change for youths of the South West and North West of Cameroon that resulted in the putting in place of a youth network to tackle the effects of climate change especially mainstreaming them on Reducing Emission of carbon dioxide, Deforestation; and Degradation (REDD). Activities of this network are still in an infant stage but it is hope that with the momentum brought by the Conference of State Parties (COP 21) on climate change that recently held in Paris, France the network will be able to take advantage of the outcome document of the conference.

In 2015/2014 CAMYOSFOP benefited from another funding from the Embassy of the United States of America in Cameroon and World Wide Fund for Nature (WWF) to engage children and youth on the protection of Cameroon’s biodiversity. Through the project, CAMYOSFOP mobilized 10 primary schools to participate in an excursion to the Mvog Betsi Zoo in Yaounde and to paint the best animal they saw in the Zoo. The 10 primary schools that participated in this activity were:

At the end of the painting competition, the following were winners: 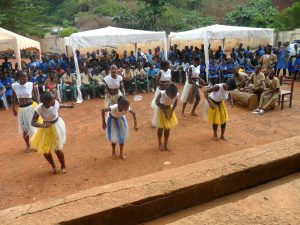 20 secondary schools were also selected to participate in an essay competition on the promotion of Cameroon’s biodiversity with the topic being: ‘How does climate change affect biodiversity?’

The 20 Secondary schools that participated in the essay competition were:

The project also involves sensitization with communication tools and above all Memorandums of Understanding (MoU) were signed with 5 community and thematic radio stations to run talk shows on issues of biodiversity and climate change. The radios engaged were:

CAMYOSFOP at the moment is presently looking forward to mobilizing more partners and funding for further engagement of the Cameroonian youth on environmental protection and the climate change debate.

For details on CAMYOSFOP activities on environmental protection and climate change, log on resources and click to reports: