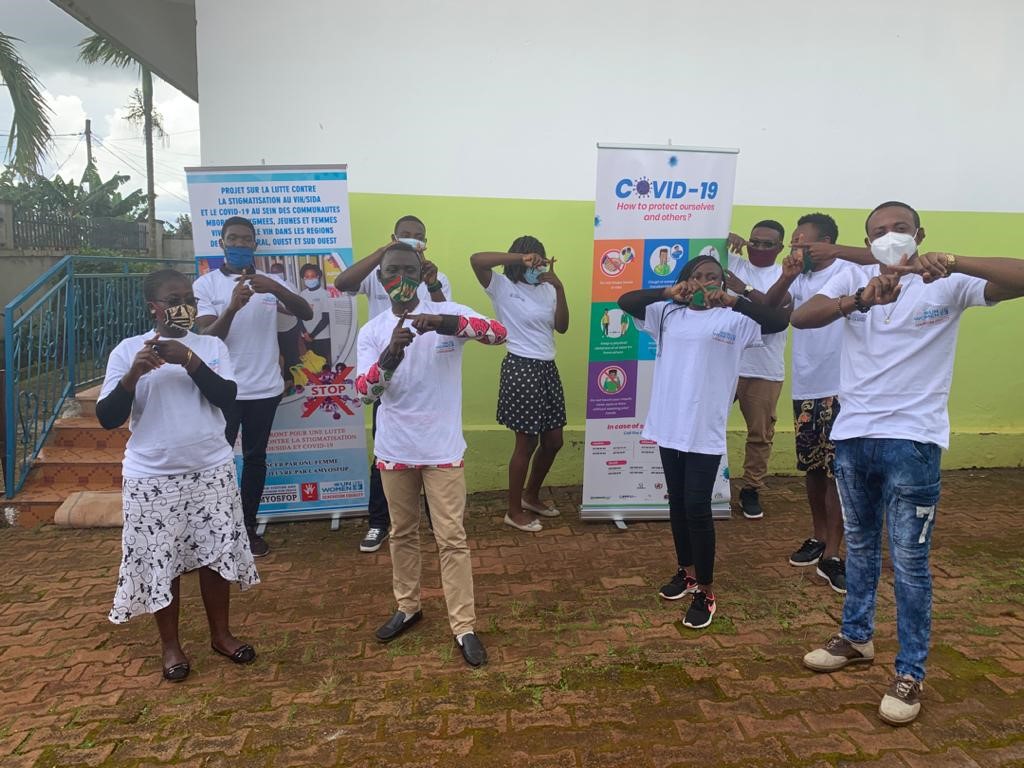 As part of the CAMYOSFOP / UN Women UBRAF project on “TheFight against the stigmatization of HIV/AIDS amid the COVID-19 with the Mbororo, Pygmy, Youth, Women Living with HIV/AIDS in the East, West, and Littoral Regions of Cameroon”, the Cameroon Youths and Students Forum for Peace (CAMYOSFOP) in partnership with the  Reseau Camerounais des Jeunes Positifs (ReCAJ+), also known in English as “Cameroon Network of Positive Youth and Adolescents’ organized two training workshops on the 8 – 9and 11–12 of September 2020, respectively, in Douala and Bafoussam as a strategy to reducing HIV-related vulnerabilities and stigmatization in the Littoral and West Regions.

The workshops that brought together young people from different backgrounds living with HIV in the Littoral and West Regions learnt and gained Knowledge on how to cater for their wellbeing and say, “NO TO STIGMATISATION”.Through working sessions, these young people shared their day-to-day experiences as people living with HIV/AIDS, the stigmatization they face as a result thereof, as well as the human rights and prevention challenges they are confronted with amid the fight against COVID-19; and made propositions on ways their situations could be improved. Some of the propositions made are some of the propositions made were to sensitize women and girls given that they are highly exposed to the risks of infection, thus a need for them to work to stop stigmatization and the virus from spreading while ensuring that their needs and rights are included in all aspects of the humanitarian response to COVID19.

Talking to the participants about the strategic plan for ReCAJ+, the discussion by the expert Parfait KEDI centered on the following:

This strategic plan, as he further noted, also focuses on facilitating, encouraging, and building the capacity of youth leaders from these regions to engage in decision-making that will guide and inform HIV/AIDS-related policies and programs for the effective management of ReCAJ+ Center and Regional offices. They called for action to reinforce protection, strengthen security, respect for human rights, and an end to stigmatization.

In the light of speaking on their experience and involvement in the workshops, one of the participants, Koup Diane that attended the Douala workshop said”

“I like the collaboration and the choice of the theme “stigmatization”. I am happy to be part of this workshop and hope the organizers don’t relent their efforts but rather organize more of such encouraging meetings.”

Tetdap Franklin that participated in the Bafoussam workshop also testified that:

“RECAJ + is an organization that I did not know existed before the end of this meeting. I learnt a lot and I hope to learn more. I appreciate the initiative of ReCAJ+, CAMYOSFOP, and UN Women to have involved young HIV patients in the fight concerning them. I would like to see you again soon for more commitments. May the Lord lead us in the accomplishment of our activities.”

The second part of the workshop consisted of the elections and installation of the network branch offices in the Littoral and West Regions. .

According to the network the head office is, inter alia, expected to:

The workshop ended with the election of the following officials to head the regional branches of the two regions:

Some Regional Executives acknowledged in an interview that followed during the workshop that the information and experience gained from it would help them in their respective tasks. Mr Feukouo Brice, speaking further on the workshop, clearly articulated:

“The training was educative, instructional, informative and engaging. I was impressed by the love and care shown to us as young adolescents living with HIV/AIDS. I applaud the initiative and the works that we as ReCAJ+ West undertake and accomplish, as well as the efforts that we dedicate to ensure an end to stigmatization.”

A remarkable observation was made to the effect that substantial changes and improvements have been recorded among young people and in communities where stigmatization programmes were introduced and implemented. This notwithstanding, there was a clear focus and strong emphasis that much still needs to be done to stop stigma.

The Executive Director of CAMYOSFOP, Mr. Ngalim Eugine, praised the initiative, urged ReCAJ+ to keep up with the good work, and congratulated the new executives. He also besought all participants present at the workshops to continue using their varied expertise to create the right and meaningful impact on young people living with HIV through their wide-ranging sensitization projects.

ECOSOCC of the African Union and CAMYOSFOP partnership in the organization of the AU event on: Civil Society Perspective on Countering Violent Extremism, Terrorism and the Illicit Proliferation of Arms in Africa ﻿

Capacity Building Workshop with Journalists on the ATT Process, in Mbalmayo from April 25 to 26, 2018.