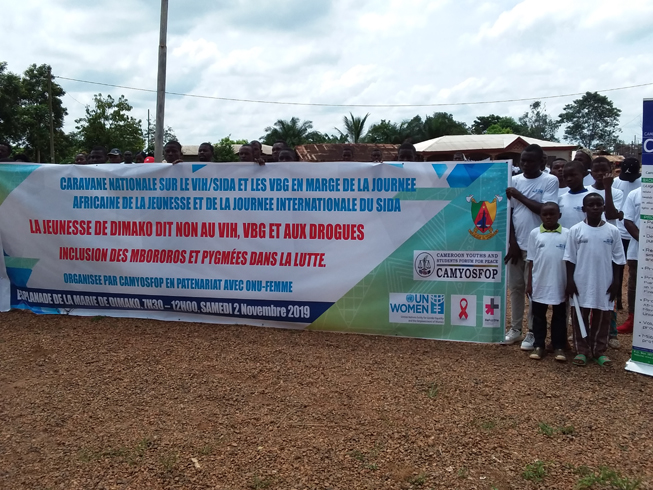 In the course of 2019 and 2020 CAMYOSFOP is engaged in mobilizing the Mbororo and Pygmy communities in the Eastern Region of Cameroon against HIV/AIDS and GBV. This program funded by UN Women is implemented on the basis that these groups are the most vulnerable in Cameroon and with very little information on the HIV infection rates.

Though the pygmies and the Mbororos are the smallest groups of people in Cameroon with the pygmies constituting about 55,000 all over Cameroon, unfortunately health requirements of these pygmies is poorly understood because of their continued isolation from the other tribes in Cameroon. Most of the pygmies are therefore tested through opportunistic diseases of HIV. Most of these tests shows that their infection rate is very low. Never the less both the pygmies and the Mbororos remains a target of HIV as a result of their reproductive health system that does not take into consideration the various family planning methods and the prevention of HIV. In the meantime, HIV today alongside other forms of violence including Female Genital Mutilation (FGM), forceful and early marriages, rape and incest, girls trafficking and school dropouts, little or no rights to inheritance and land tenure constitute serious violence to the already vulnerable Mbororo and Pygmies women and girls.

This program started with the capacity building of women peer educators and community leaders of both communities on the fight against HIV/AIDS and GBV. This was followed by a caravan march across the junction town of Dimako that brought over 1000 peoples of all works of life to publicly manifest against the HIV/AIDS pandemic and ending GBV in their communities. The caravan event also included the screening of over 200 youth on HIV and the endorsement of the HeForShe Gender Equality Campaign by over 150 men alongside musical performance by local artists was presided at by the Divisional Officer of Dimako. Other personalities that took to the stage to propagate a message on the phenomenon of HIV/GBV included the Divisional Delegate of the Ministry of Youth and Civic Education, the Divisional President of the National Youth Council, the Representative of UN Women and the Executive Director of CAMYOSFOP.

In 2020 CAMYOSFOP will continue working with both groups in their communities in engaging them to shown HIV/AIDS and GBV through regular testing and mastering of the legal procedures on the fight against GBV.

Below are some of the pictures from the caravan event.

ECOSOCC of the African Union and CAMYOSFOP partnership in the organization of the AU event on: Civil Society Perspective on Countering Violent Extremism, Terrorism and the Illicit Proliferation of Arms in Africa ﻿