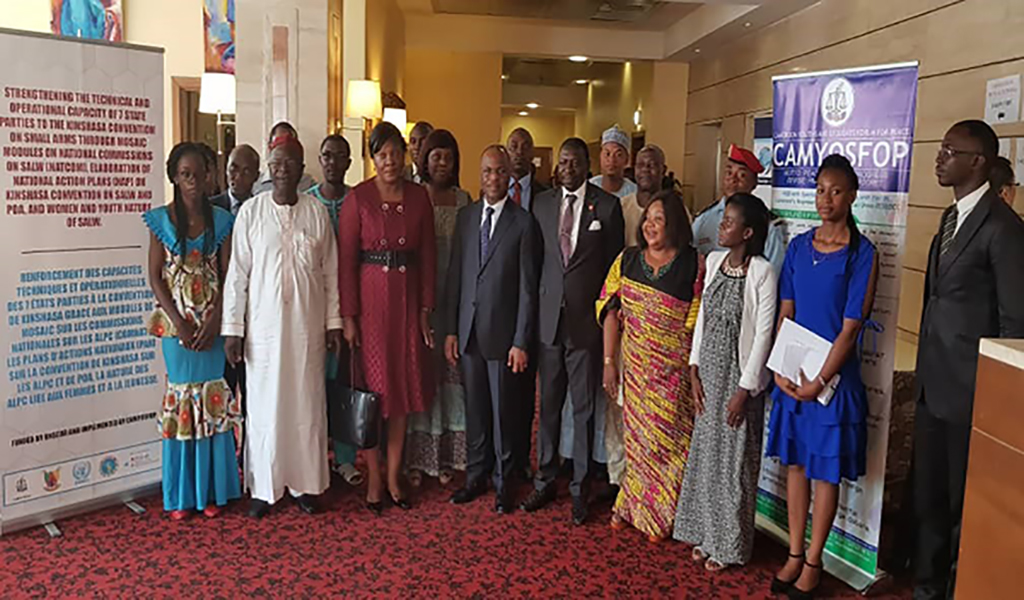 As part of activities to launch the CAMYOSFOP United Nation Trust Facility Supporting Cooperation on Arms Regulation (UNSCAR) project on: Strengthening the capacities of 7 States Parties to the Kinshasa Convention on Small Arms and Light Weapons (SALW) in Central Africa on the use of MOSAIC modules in arms control, CAMYOSFOP organized a one day capacity building workshop in Yaounde, Djeuga – Palace to train experts on the use of the MOSAIC Tool kit on the Kinshasa Convention for the Control of Small Arms and Light Weapons, their Ammunition and all Parts and Components that can be used for their Manufacture, Repair and Assembly. The trained experts were drawn from the Ministries of External Relations, Ministry of Defense (MINDEF), General Delegation of National Security (DGSN), National Commission on Human rights and Freedoms (NCHRF), civil society Organizations and Journalist. Facilitating the event was Dr. Fung Ivo Richard, Senior Official of the United Nations Office for Disarmament Affairs (UNODA) in New York.

The training covered modules such as an overview of the MOSAIC, National Coordinating Mechanisms on Small Arms and Light Weapons Control (NatCOM), designing and implementing a National Action Plan (NAP), and Gender and Youth Nature of Small Arms and Light Weapons. The trained experts also worked on the methodology for the elaboration of a National Action Plan (NAP) on Program of Action (PoA) on the Kinshasa Convention and the creation of a National Commission (NatCOM) on the management of SALW in Cameroon.  Dr. Fung Ivo during the training underscored the need to include the Gender Dimension in setting up the National Commission on Small Arms and Light Weapons and the National Action Plan. Participants also took time to validate the toolkit on the implementation of the Kinshasa Convention on SALW and POA in Central Africa through the MOSAIC modules on Arms Control.

The Central African Convention for the Control of Small Arms and Light Weapons, their Ammunition and all Parts and Components that can be used for their Manufacture, Repair and Assembly, also known as the Kinshasa Convention, was adopted in 2010 by eleven signatories. The conditions for the entry into force of the instrument were met on February 6 2017 and the convention entered into force on March 8 2017. Thus far, Angola, Cameroon, Central African Republic, Chad, Congo, Gabon and São Tomé and Príncipe have ratified the convention. This convention plays a key role in the fight against the illicit manufacturing of and trafficking in small arms and light weapons. It complements and reinforces the existing regional and global framework comprising, among others, the Arms Trade Treaty, the United Nations Convention Against Transnational Organized Crime (UNTOC), and its Firearms Protocol as well as the UN Program of Action on the fight against the Illicit proliferation of Small arms and Light Weapons.

The ratification of the instrument by Cameroon and the steps taken since it coming into force on March 8, demonstrates Cameroons willingness to fight against illicit arms and ammunitions. Thanks to the United Nations Office for Disarmament Affairs, Cameroon secured funding from UNSCAR to strengthen the technical and operational capacities of Seven States Parties to the Kinshasa Convention on the implementation of the convention through MOSAIC. The project implementation started in January 2019 and is expected to end in December 2019.  CAMYOSFOP hopes that at the end of the project, Cameroon will set up a National Commission for the management of Small Arms and light Weapons.