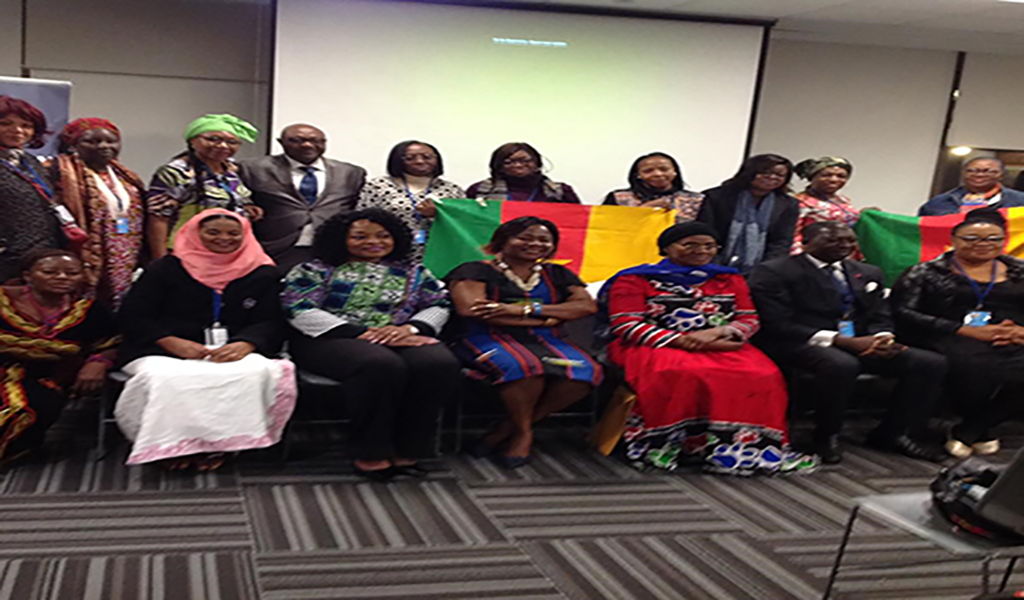 The Commission on the Status of Women (CSW) is an annual conference where representatives from member states, NGO workers, and women’s rights activists gather to evaluate the global progress on gender and equality. The conference is instrumental in promoting women’s rights, documenting the reality of women’s lives throughout the world, and shaping global standards on gender equality and the empowerment of women.

This year, the event took place in New York from March 11–22 2019 under two themes: The priority theme was: ‘Social protection systems, access to public services and sustainable infrastructure for gender equality and the empowerment of women and girls’. The review theme was: ‘Women’s empowerment and the link to sustainable development’. Apart from the main program organized in the UN premises, several organizations organized side events on different topics. In this light, CAMYOSFOP in partnership with the Ministry of Women Empowerment and the Family, HOFNA and WILF Cameroon organized a side event to show case Government and Civil Society joint efforts on innovative and holistic perspective on promoting the HeforShe gender equality and ending violence against women and girls.

The event that was presided over by the Minister of Women Empowerment and the Family Professor Marie Therese Abena Ondoa, saw the participation of delegates from various ministries in Cameroon and Civil society organizations. Panelists discussions covered topics on Promoting gender equality and fighting GBV through the provision of leadership and entrepreneurial skills to vulnerable groups in Cameroon, The critical role of the civil society in the implementation of UNSC Resolution 1325 and how to better design efficient gender policies and the fight against GBV could be a vector of development in Cameroon.

Mr. NGALIM Eugine Nyuydine, Executive Director, Cameroon Youths and Students Forum for Peace (CAMYOSFOP) shared CAMYOSFOP’s experiences over the past years in engaging the Cameroonian youth in the promotion of gender equality and the fight against GBV through the Boys-to-Boys Strategy on Ending Violence against Women and Girls. Worthy to note is the fact that CAMYOSFOP initiated the HeForShe Gender Equality Campaign in Cameroon by creating a National Youth Network on the Boys-to-Boys Initiative on Ending Violence against Women and Girls (NAYONEB) in Cameroon in 2014. The network has been able to mobilize thousands of the male population in the 10 Regions of Cameroon to endorse the HeForshe campaign and promote gender equality in almost every domain in Cameroon.

Speaking during the side event, the Minister of Women Empowerment and the Family lauded the initiative and congratulated CAMYOSFOP and partners for their formidable efforts in the fight against GBV and the promotion of gender equality in Cameroon. He equally underscored the need to intensify the fight in Cameroon through the HeforShe campaign.

GBV perpetrated by men against women has multiple ramifications which include consequences such as physical, emotional, socio-cultural, sexual and political violence cutting across sectors and institutions in Cameroon.  In Cameroon, it is still a common fact that girls are still victims of Female Genital Mutilation (FGM), forceful and early marriages, rape and incest, have little or no rights to inheritance and land ownership, lowly educated, victims of human trafficking, relegated to the background on decision-making processes amongst others. Domestic violence inflicted by men against women in Cameroon is extremely very high. The 2011 Demographic and Health Survey (DHS) highlighted multiple forms of violence against women including: 20% of women who had had sexual intercourse did so for the first time against their will, especially those who had the intercourse prior to the age of 15 (30%). 34% of women aged 15 to 49 have experienced physical violence: 8% have experienced sexual violence and 21% have experienced both physical and sexual violence. And thirdly, among women who have already been in a union, 60% have experienced physical, sexual or emotional violence from their current or most recent husband.

Equally, the phenomenon of gender inequalities is still a reality in Cameroon and very glaring in sectors such as the government where out of about 30 Ministers, only 8 are women, in a Senate of 100 only 20 are women, in a Parliament of 180 only 56 are women, in the Territorial Command only 1 woman is a Division Official Officer out of 58, in public corporations only 7 women out of 67 are CEOs. The same trend is witnessed in the Private Sector and all aspects of life in traditional set ups and communities where the boy child is valued more than the girl child.

To curb this phenomenon, CSOs in partnership with MINPROFF and UN Women continue to implement innovative initiatives to end gender inequality and GBV. The side event organised by CAMYOSFOP during CSW 63 provided another platform for CSOs toshare best practices and chart a new course regarding the fight against GBV in Cameroon.

MESSAGE FROM THE EXECUTIVE DIRECTOR OF CAMYOSFOP

Deliberations on the ATT

Deliberations on the ATT